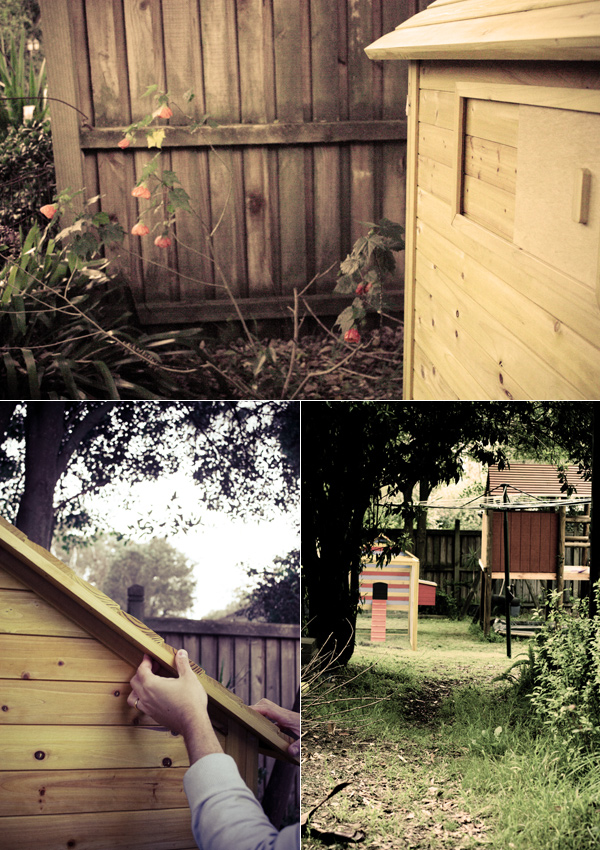 Over the years I have become an advocate of eating healthier, buying local, living smaller (well this one is not really true although my intentions are noble) and getting back to the grass roots. Two years ago we started our first veggie patch after sporadically growing herbs and carrots all over the yard in patches of sunshine. A year later we added our second patch and started two compost bins. A chook house was the next logical step of progression. 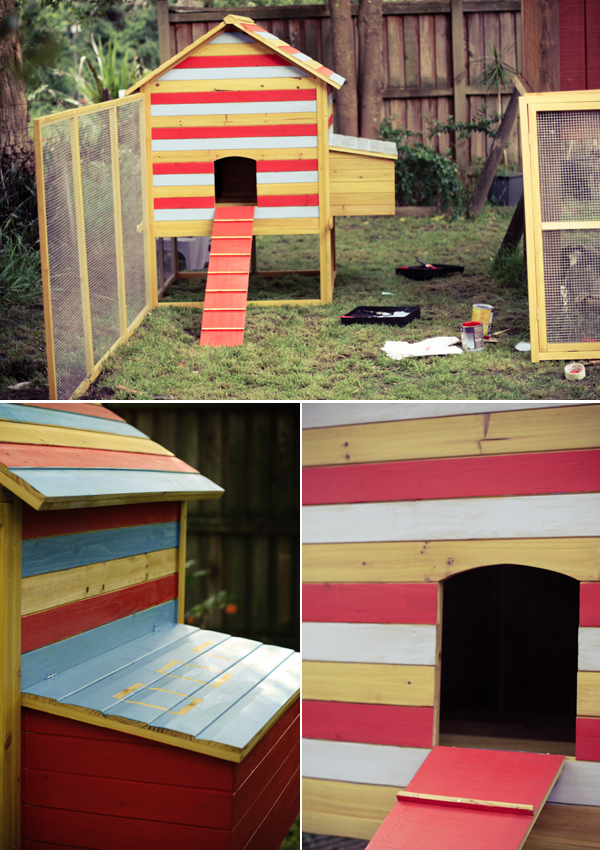 I am quite terrified of critters big and small. I used to not be. But now I am. That is just the way it is. Nick isn’t. When he was little he dreamt of being a farmer, why else would an 8 year old watch agricultural shows? For a while after that his ambition leaned towards working at the zoo. He has always loved animals and has had many pets growing up. He still does. But then he got caught up in the urban jungle like most of us do. Knowing he would be great with the chooks was the reason I initiated the whole chook house process. That and the kids being crazy excited about getting a pet. Well two pets. Correction. Three pets! And don’t forget that certain appeal a die hard foodie like me would have for freshly laid eggs. Oh the cakes I could bake! 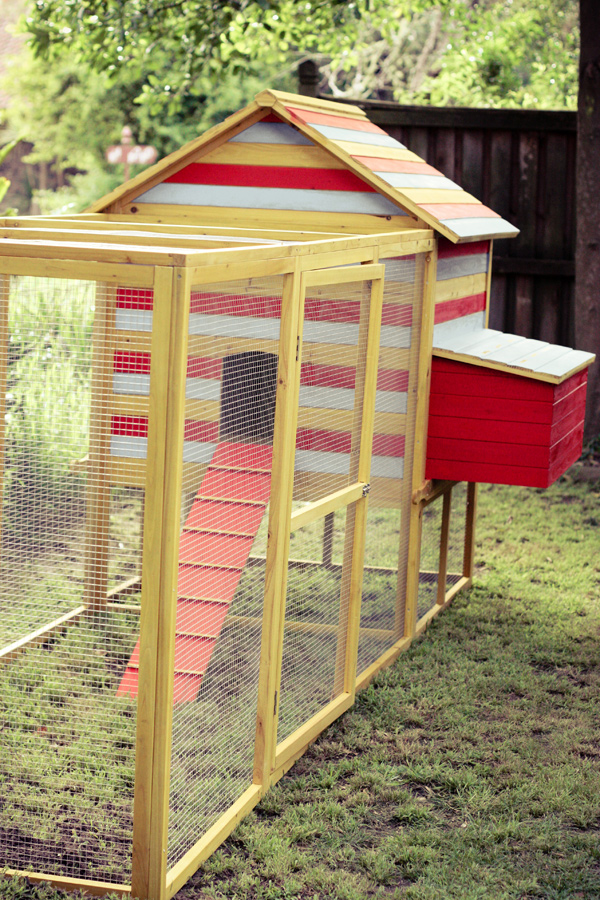 After setting a budget and researching, we bought our chicken coop from K-Mate. In the past I have bought a massive stainless steel kitchen bench from them. The coop arrived promptly by road freight, well packaged in two boxes. Nick managed to put it together without bungling up in less than two hours. We then headed to the hardware store and bought some paint. In a couple of hours the chook pen was painted and ready for its house guests. The boys even had a go in the chook house pretending to be chickens, squawking merrily and pecking everywhere in that oddly staccato movement that chickens make. 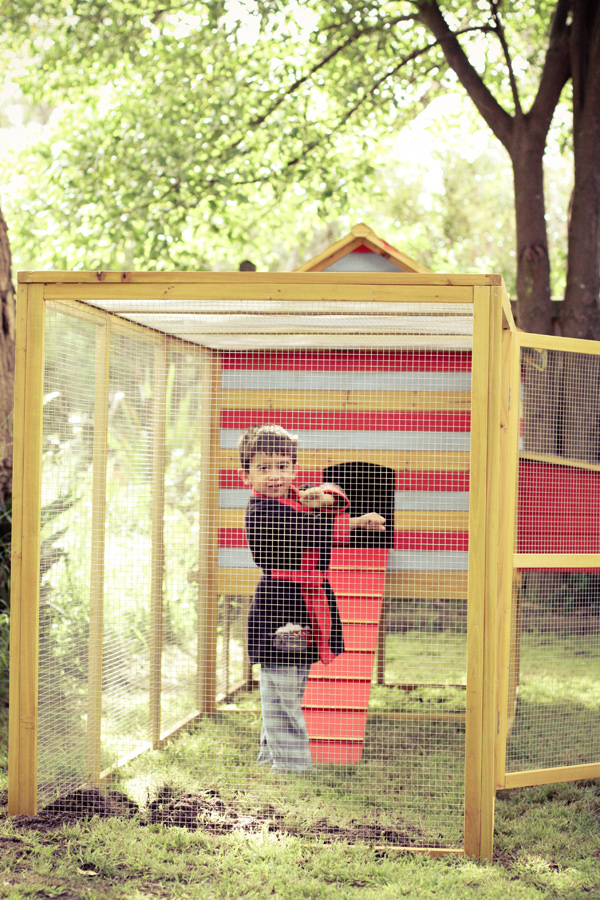 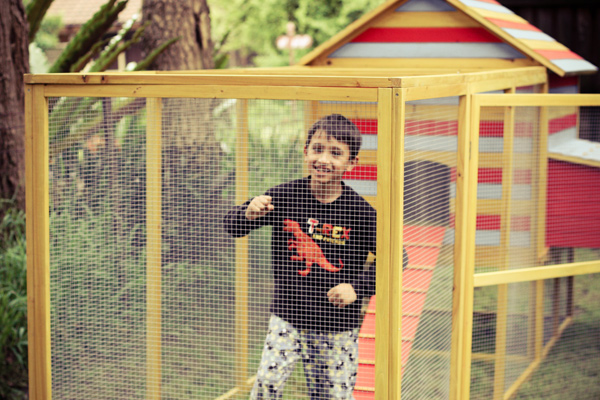 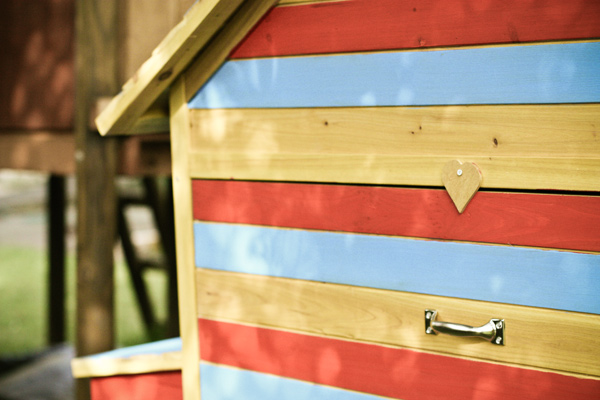 On a fine Saturday morning we headed to Rent-A-Chook in Ryde and picked up Mario, Luigi And Yoshi, our three Isa Brown laying hens. The people there were very helpful with lots of useful advice. We bought a bag of 20 kg certified organic chicken feed, some worming tablets and wire netting for under the coop to prevent fox attacks. According to the guy at Rent-A-Chook, there were surprisingly 10 foxes per square kilometer in the Sydney area and chooks were often helpless victims to their preying habits. After also being given make shift feeders and waterers carved simply from plastic milk bottles we drove back home. 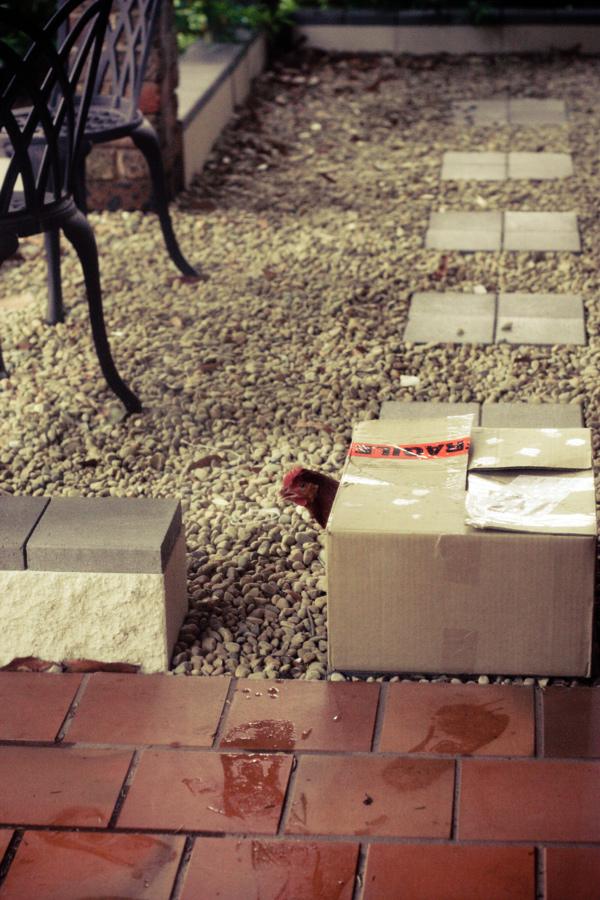 Then it rained and the chickens had to stay cooped up in their cardboard box (absolutely no pun intended!), while Nick and I quite comically set about lifting and shifting the entire chook house and getting the wire netting under it. Believe me, it wasn’t easy. Amidst Nick’s promise of back massages and the rain pelting on our backs, we kept persevering and managed to eventually get the wire netting under the chook house. A word to the wise, if your chook house doesn’t have a bottom (wood/wire netting or board) it is best to put that in first and then assemble the house over it. We like to stay fit, so we always do things the longer harder way. 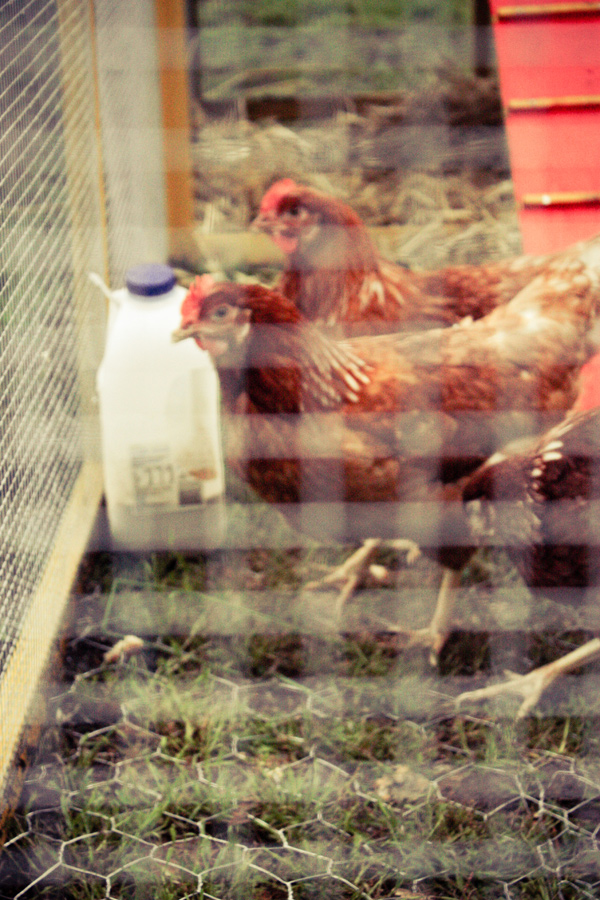 In went the straw, the food and water. And then finally our three beautiful chickens. For the first day and night, they had to be literally pushed up the red ramp and then carried down as they had no clue what to do. But they caught on real quick. The next morning we made them some fresh spaghetti for breakfast. They weren’t overly excited about it. When Nick dug up some worms from the garden for them, they went nuts with excitement. I pretended that my feelings weren’t hurt when they seemed to prefer squishy fat worms over my perfectly cooked strands of spaghetti. Ah well! 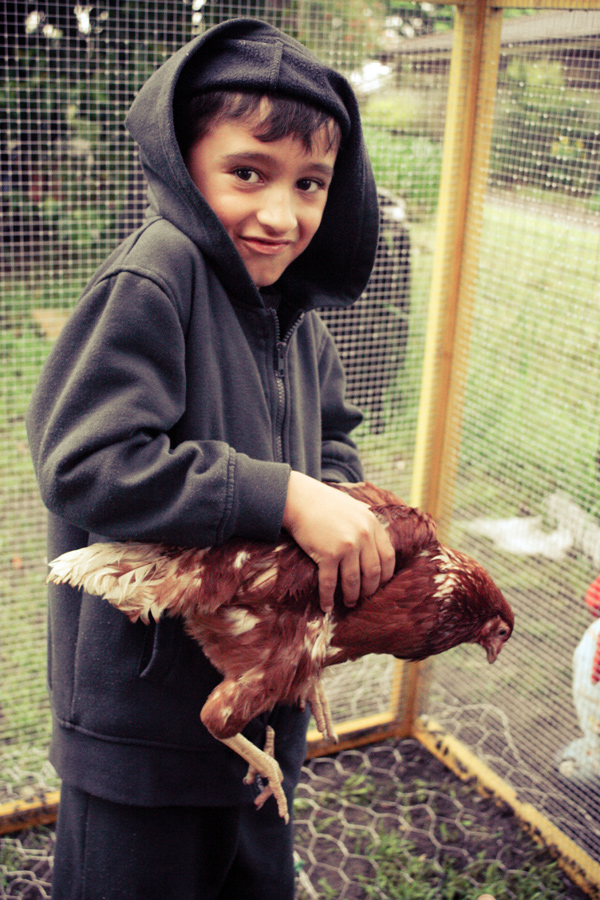 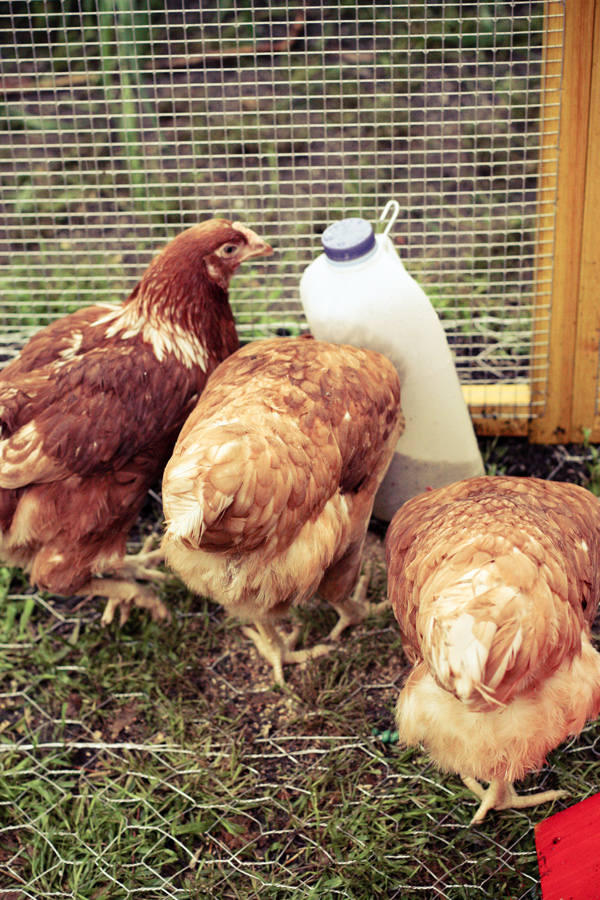 The chook house is very cute and one of the largest available in the market. It has three nesting boxes and room for at least 4 to 5 more chooks. The two lighter coloured hens are Mario and Luigi and they are both very feisty and flighty, Luigi more than Mario. The littler darker brown one is Yoshi and is the most docile. The boys spend every waking minute talking to the chooks, hanging around the chook house and feeding them bread scraps and grass. Once or twice a day they are in their cuddling and petting them, something that will take me weeks to bring myself to do. 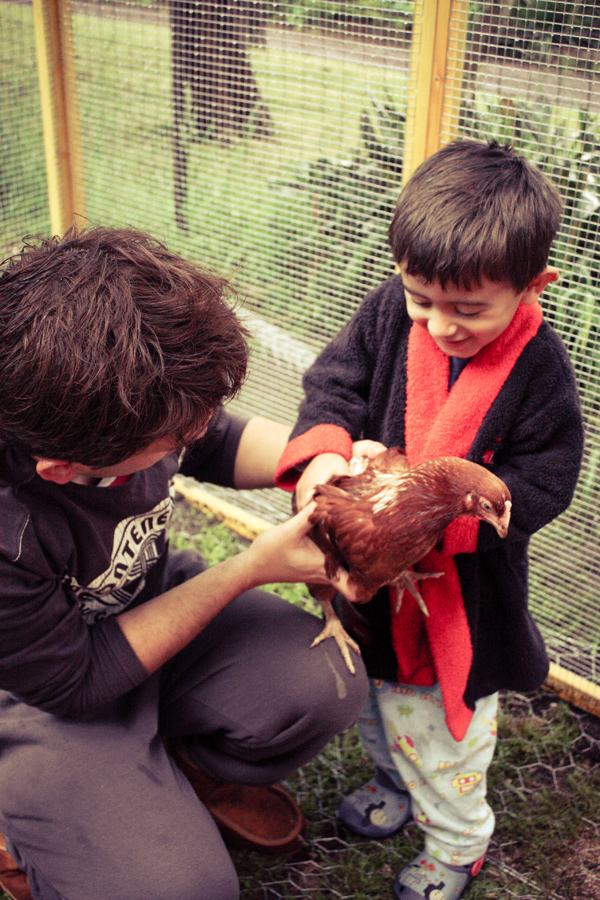 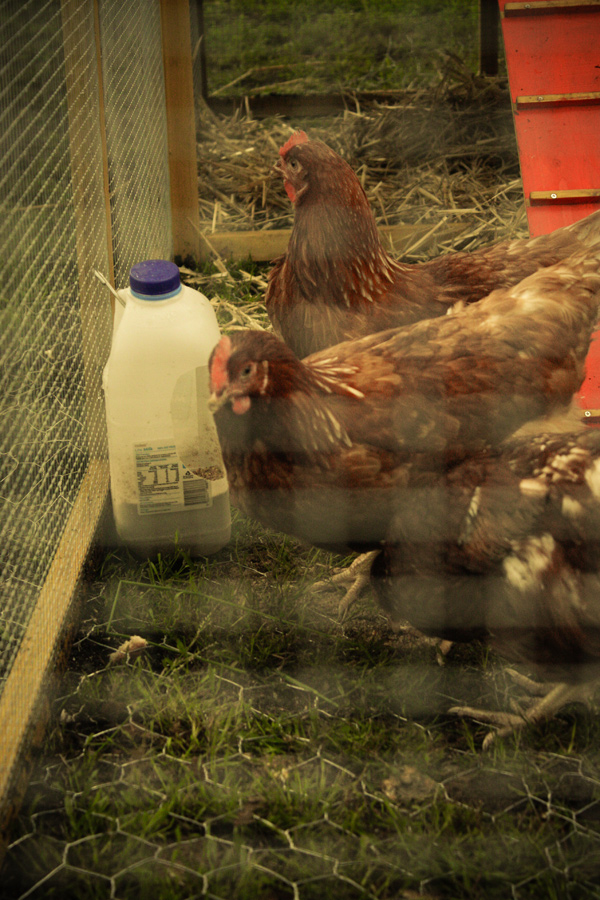 We have a very big garden and ocassionally we’ll let the chooks roam free making sure they don’t destroy the veggie patches. In time we’ll get a bigger chicken run so they have more space to explore and dig, something that they love doing. Despite being skittish, I am so glad we now have chooks. Our lives have changed even though we don’t know it yet and while the boys discuss chicken poop at the dinner table amidst guffaws of laughter and I catch Nick watching chicken videos on youtube, I know I am dreaming of bringing home a couple more very soon. 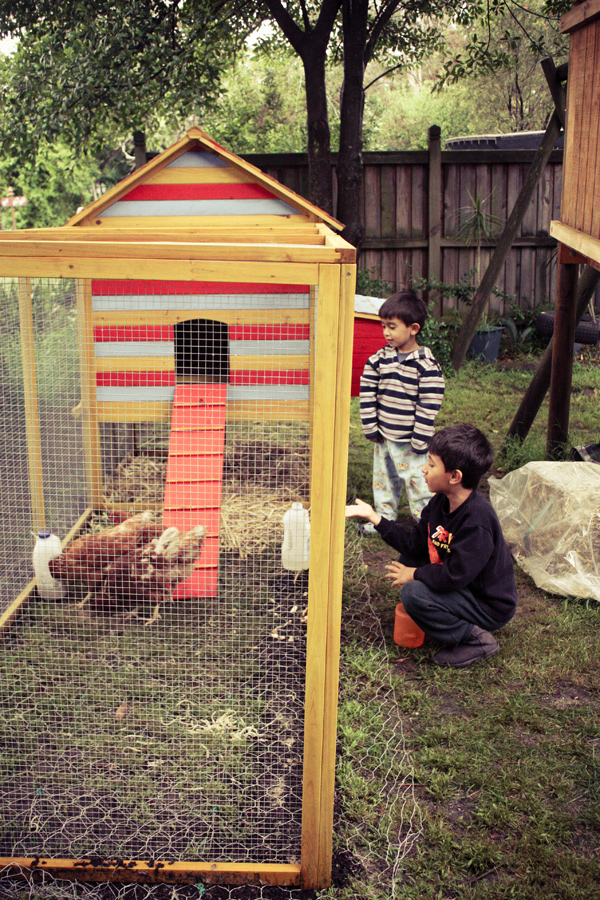 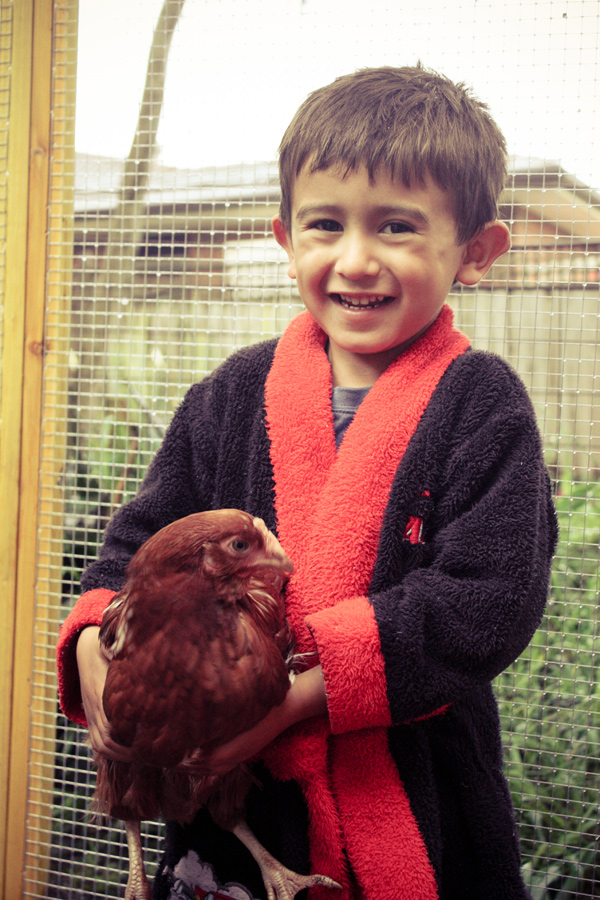 Cost Of Setting Up The Chook House