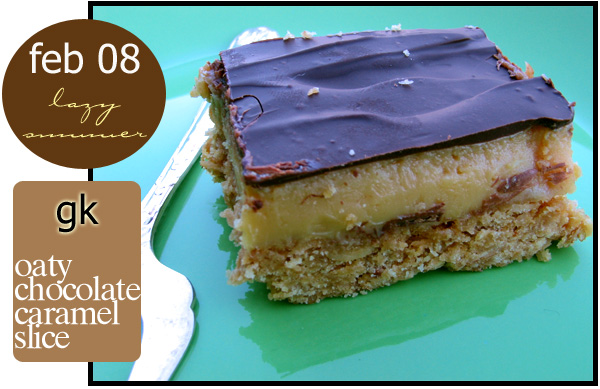 How many times have you overlooked those little pull-out cards accompanying a product advertisement in a cooking magazine? Well I have plenty of times, until one fine day last year I paused over one that caught my eye. It was a totally random occurrence and now when I think back, I am glad I did. The product was Nestle’s dark chocolate bits and they had a recipe for "Chocolate Caramel Slice" featured on the card with a gorgeous photo of the most perfect slice I had ever seen. The inclusion of oats in the recipe sold it to me really fast, as I thought to myself "Ah well, a little bit of healthy breakfasty with a whole lot of sinful chocolatey and caramelly!!". So, then I made it for a Playgroup breakfast one morning and it was a hit. I tweaked it a bit and tried it again for a barbecue get-together the following weekend. It was devoured in seconds. Then for a picnic lunch the following month and then one morning for no simple reason at all, since Nick kept asking when I was making it next. I have forgotten the countless times I must have made it since first laying an eye on that card which is now pinned to my recipe diary. It is simple and brilliant in its sinful taste. I am playing around with the idea of making it this week, since I haven’t made these in a while. Just the thought of sinking my teeth through a well set, thin layer of dark chocolate to the gooey, buttery caramel and ending with an oaty, coconutty crunch is making my taste buds tingle. 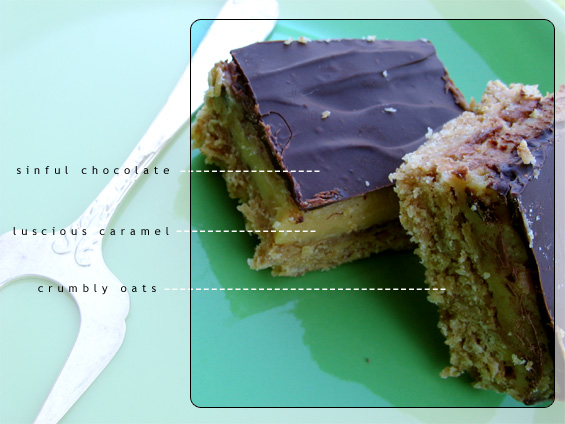 Method
Preheat oven to 180ºC. Combine flour, oats, coconut, butter and sugar in a bowl. Mix well. Press into the base of a 18cm x 28cm lamington/slice pan lined with non-stick baking paper hanging over the edge. Bake for 10 minutes until golden. Combine condensed milk, golden syrup and extra butter in pan and bring to a boil stirring constantly. Reduce heat, simmer for 5 minutes stirring until it reaches a light brown colour. Pour caramel over cooked base, return to the oven and bake for a further 10 minutes. Cool. Spread the melted couverture chocolate over the caramel filling in swirling motions. Chill in the fridge for at least 1-2 hours before slicing into neat squares.