A Basic No Churn Condensed Milk Ice Cream With Jam

No-Churn! I love that word. Not because I am lazy. I can churn like a machine, even by hand. But because it means the recipe is more accessible, might get done quickly and I might get away without bringing my ice cream maker out from the depths of the spare closet exploding with a million props and appliances. Okay, I might be a tad lazy.

So, back to this fabulous no-churn ice cream. This is essentially a 4-ingredient no-brainer ice cream that doesn't require cooking and doesn't require churning. The idea for this ice cream came when I was shooting lifestyle shots for the extra pages of my cookbook. I had bought a dozen or so Bonne Maman jam jars in every imaginable flavour (they now do a delightful caramel spread. Did you know?) for the shoot.

After giving away a few, I decided to use them in fun ways. One of them was making ice cream. It was really a basic condensed milk ice cream recipe that I have followed over the years with a touch of jam. The beauty of this recipe is that you could use your favourite spread (brand and flavour) and it would instantly be a new gorgeous dessert recipe that you won't be able to live without. This ice cream has a solid homemade feel to it and the consistency of a slab ice cream despite being ridiculously creamy. None of that airy fluff here! Just the way I like it (very occasionally).

Although we are officially into autumn in Australia, we still are being graced with some warm days. I wanted to get this recipe up before we lost that last bit of sunshine. This recipe first appeared in ELLE Magazine's February 2014 issue where I served it alongside an Asian Chop Chop Salad and Brown Fried Rice with Roast Duck. 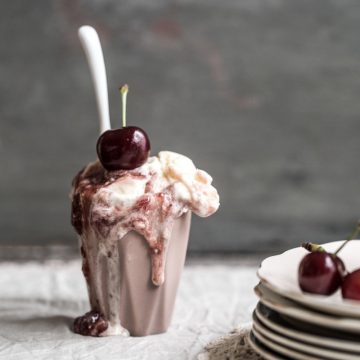