The crispiest, golden Rosemary Anzac Biscuit recipe for your baking pleasure! Tested dozens of times, foolproof and absolutely delicious with the abundance of fresh rosemary dotting these delightful biscuits. An easy recipe to bake every week because everyone (especially the kids) loves it and it makes a good snack!

The idea of adding rosemary to baked treats is something I was introduced to after moving to Australia in 2005. In anticipation of all the lovely things I was going to bake, I planted a rosemary bush in my garden and over the years it became the mother bush, birthing dozens of cuttings and subsequent rosemary bushes.

With its deep connection to the Anzac history at Gallipoli, rosemary has made its way into cakes, cookies, tarts and even ice cream. More so on my blog over the years, first in the form of these delicious Wholemeal Rosemary And Raisin cookies packed with fruit and nut that I used to bake and take everywhere. And then in the form of these delicious healthy Date Walnut & Chia Rosemary Cookies or this gorgeous Rosemary & Spice Quince Loaf.

But somehow I never thought about adding rosemary to Anzac biscuits (or bikkies, as they are so lovingly called) - the most obvious of them all. These beautifully crispy, golden brown biscuits were baked to send in tins to the soldiers during WWI. The term originated from ANZACS (Australian & New Zealand Army Corps). The absence of eggs and inclusion of high fructose gave them a long shelf life which was very important while sending care packages to the soldiers.

I first starting adding chopped rosemary to my Anzac Biscuits after coming across a recipe on an Australian Blog called Erin Made This many moons ago. The blog no longer exists but you can still see Erin's beautiful bakes on her Instagram profile. After her blog became defunct, I was forced to modify my own Anzac Biscuit recipe to create the crispiest, most golden biscuit studded with bright, freshly chopped rosemary leaves. An abundance of them!

If you love Anzac Biscuits, this Rosemary Anzac Biscuit is set to become your new favourite baked treat. It is so incredibly straightforward, that I can now bake it with my eyes closed. After dozens and dozens of test batches, I have managed to get the recipe absolutely right - one that makes a perfect biscuit that everyone loves! 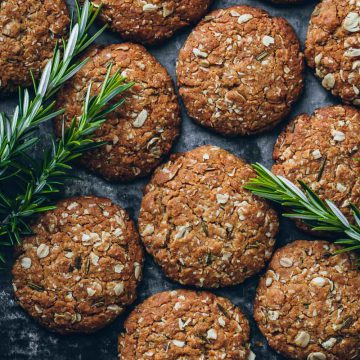 Rapadura sugar – Rapadura sugar is unrefined palm sugar. You can substitute with coconut sugar or brown sugar. Golden Syrup - Golden syrup is a deep amber coloured treacle, a form of inverted sugar syrup made by boiling down sugar in water and lemon juice. Substitutes include corn syrup or molasses or a mix of both. Honey has a distinct taste so it doesn't make the best substitute.  Make Golden Syrup At Home - Boil 3 cups raw sugar and 2 tablespoons brown sugar in 1 1/4 cup water and 2 tablespoons lemon juice until a thick syrup is formed. This keeps well in the fridge for a few weeks. The biscuits will get softer as the days go by but you can easily crisp them up in a pre-heated oven for 5 minutes.
Did you make my recipe?I'd love to hear how you went! Tag me on Instagram @cookrepublic