Sour cream and a secret ingredient make these mango popsicles unforgettably delicious! Plus they are so easily and quickly made in the blender that even the kids love making them.Mango and cream make their grand appearance every single summer in our home. It is a flavour combination that we absolutely cannot resist. My love affair with icy mango treats probably started when mum announced one hot summer back in India "Let's go out! I've heard a new homemade ice cream shop has opened up and apparently they only sell one flavour of ice cream and there are queues!"

Even back then amidst commercially churned tubs of ice cream, an old fashioned homemade ice cream shop was the talk of the town. And queues were a good sign. The ice cream shop positioned next to a cheese selling Airstream was small batch and artisanal, opening only during the hot summer months and churning out creamy, rich, golden ice cream made with the freshest Alphonso mangoes of the season. It was simply called "Pot Ice Cream".

I remember being giddy with excitement as we would finally make it to the front of the queue and order three cups. The lady would scoop out of a giant green metal vat, one of only two and serve us in stainless steel footed ice cream cups. Perched on my dad's scooter, it was seriously the most delicious thing I had ever tasted. You see, it had a secret ingredient that made it extra special. Saffron!

This quick blender ice cream is an ode to that childhood memory. The sour cream adds the requisite tang to an otherwise sweet ice cream. It mimics the tanginess of the Alphonso mango that is missing in most modern day mango cultivars grown in Australia. Make it, taste it and tell me how you go when you tag your creations with #cookrepublic. Isn't it the most gorgeous mango ice cream you have ever tasted?? 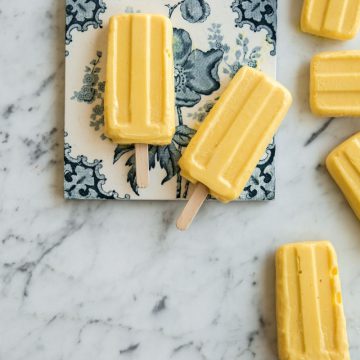 To un mould pops, run some hot water around the moulds (or dip the moulds in a glass of hot water) and then gently un mould while holding the popsicle stick.
Did you make my recipe?I'd love to hear how you went! Tag me on Instagram @cookrepublic