"Mum, look at me!" left shoulder thrown back, little wiry body angled sideways, knees bent in some kind of a stance, chin tucked down, eyes glaring menacingly, skinny right arm stretched towards me, the forefinger and thumb cocking an imaginary weapon. "Guess who I am?"

A little boy in terrible pain from the extreme contortionist act, was my first thought.

As if it was even possible, he contorted further, arching his back and pretending to mock-shoot an imaginary enemy (I happened to be in his line of fire!). He then casually jerked his head to indicate behind him, "Look who's behind me?"

I leaned to one side clearly seeing no one behind him. "Oh My God! Who is it?" I said, eyes growing wider with panic.

"Nnn Rrrrrrr-ghghghghgh!" the voice came from somewhere inside him, his lips hardly moving. He was casting this voice for whatever was behind him. I was impressed with his amateur ventriloquism.

"Come on mum! I mean, Princess Leia!" he said, lips pulled in that iconic drawl.

"Oh! Oh! You are Han Solo! OMG, is that Chewbacca behind you??" I squealed.

"Yup! Okay see ya. I've got to defeat Darth Vader!" he announced abruptly, his guessing game now finished and ran off into his older brother's room from where I could hear heavy breathing. Very heavy breathing. Very sinister heavy breathing. As the light sabre sounds escalated and I heard a deep voice saying "You don't know the power of the dark side!", I walked away with a smile on my face to a now cold cup of tea.

When my boys watched the entire seven Star Wars movies last year, I had no idea about how fanatic they were going to get about this space franchise that reduces grown men to imaginary light sabre brandishing warriors. Almost a year later, the fanaticism hasn't abated at all. It has now manifested itself into hours of creating imaginary Star Wars lego scenes, practicing character voices, writing alternate Star Wars scripts and shooting Star Wars lego stop motion animations.

But I was worried. I knew he was going to request a Star Wars cake for his birthday and I am NOT a master baker. To make matters worse, on the eve of the release of Star Wars - A Force Awakens; Disney sent me a 3D life size BB8 cake. ??!!##@##!?! Since it was in December and his birthday was in January, I told him that we could pretend the BB8 cake was his birthday cake. He was crestfallen. "But mum! You haven't made it!!" Oh go on, tug at those heartstrings won't you!

The BB8 cake was seriously delicious but I needed to put on my thinking hat for a cake that would look Star Wars-y enough but require none of the sugary icing or colour that I absolutely hate (and so do the boys!). So I baked two chocolate cakes. A chocolate chip and orange cake for the base and a variation of my sticky dark chocolate cake for the top.

I chose the sticky dark chocolate cake because it sinks after baking, creating a crater that would make George Lucas proud if he was scouting for locations for his next movie. I then plastered both cakes together with a simple chocolate icing and iced the sides with it too. I then plonked some lego Star Wars characters (namely Han Solo, Chewie, BB8) on top along with one lone Lego tree and Voila! A Star Wars Cake that looked authentic, tasted like a dream and got that priceless reaction from him. To my quirky, quick thinking, kind-hearted, curious minded hugger - Happy 8th darling!

This cake is delightfully simple to bake. And the best part is getting creative with what you put on top to compliment your birthday theme. If you bake this cake and love it, please rate it below and leave your feedback to help others who are thinking of baking it as well. And if you take pictures of your glorious creations, don't forget to share them with me on Instagram @cookrepublic Thanks lovelies! x 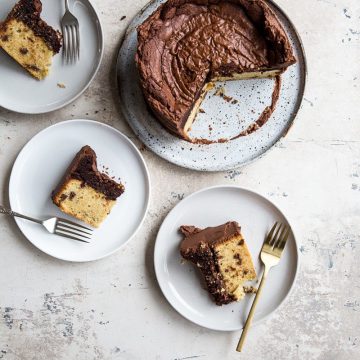 For The Chocolate Icing

To Make The Chocolate Icing